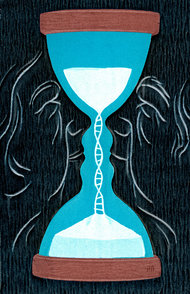 Experts in aging have identified markers that tell us how quickly an individual is aging. These markers can be identified by blood testing and other measures, including measuring the eye's ability to pick out very lightly shaded images on white backgrounds, called conrast sensititvity, and how many times one can step up onto a low platform in 16 seconds.  In a study published in January in Molecular Cell, Dr. Kang Zhang, founding director of the Institute for Genomic Medicine at UC San Diego, scientists discovered a pattern 0of epigenetic markers on DNA molecules that predictably change wih age.  Taken collectivly, these tags spell out a "signature for age" that is not dependent on disease or ethnic background.

Using these markers, men were found to age on average 4 % faster than women.

Aging-rate tests may someday be standard in annual physicals.

Summer Body Your New Year Resolution? CoolSculpting® Consultation With One of Our Solutionists

Venus Versa IPL is the newest addition to our office. This device gives us the flexibility with treating a wider range of skin conditions using the following treatment options:

Call us for more details